Wade and Hart were comprised of Jake Hart and Chris Wade, who together unleashed a surreal blend of spoken word mayhem and what the hearing impaired might call songs. These recordings took place between 2007 and 2010 and both albums feature the best of the some 100 tracks the perv boys did together during those coffee and fish butty fueled recording sessions...

The two Ringos discuss their house collections, the hen man clucks all day and night (it makes him feel good) and the Pasta Man gets cooked. All the while Fat Finley gorges on ice cream..
Recorded between 2007 and 2010

DINO DON AND THE ORGAN OF BREAD 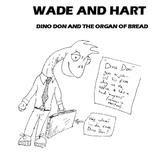 The boys at the pizzeria enjoy some Dino Don, the Wisdom Twins exchange wisdom, the Killer Robot terrifies with his special gun and the curse of the number 146 is explained. Also, Professor Scissors reads some poetry by Keys McResty....
Recorded between 2007 and 2010

Alonut Missing amazes Wade and Hart with his bird discoveries and moonpipe playing, there are tips and benefits given on the act of getting cosy and the Wisdom Twins are hung for their crimes. Plus..... The Killer Robot returns.
Recorded between 2007 and 2010

Download File
Below are links to places where you can find Chris's other work on the
net, including poetry and illustrations.